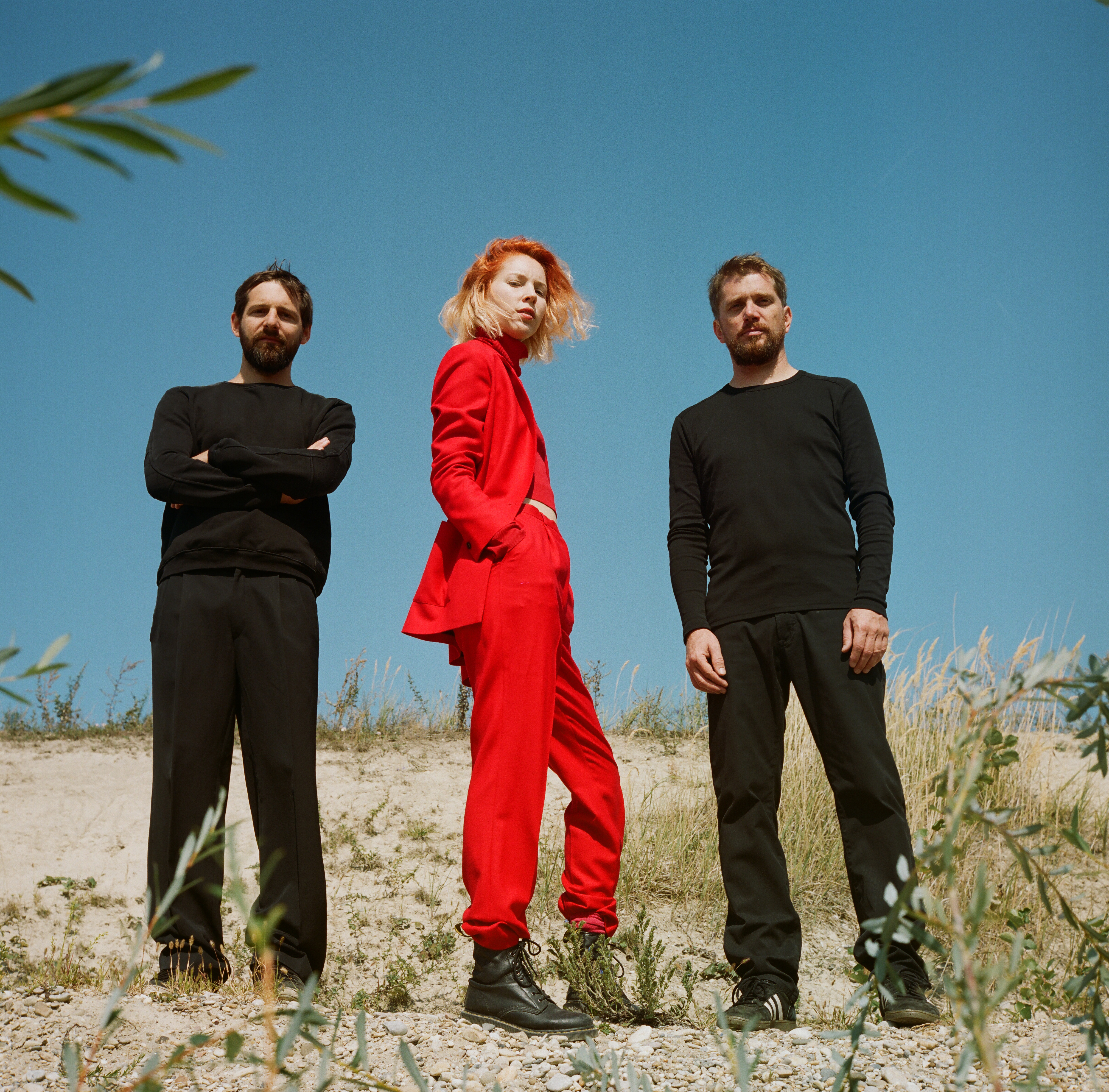 Fronted by Mira Lu Kovacs, Christian Grobauer (drums) and Walter Singer (bass) – Schmieds Puls are an Austrian outfit who have been making waves in their home territory for some time. Spanning genres, refusing to be pigeonholed and being politically outspoken, particularly regarding Mira’s feminism has cemented them as one of the countries most interesting outputs.

New album Manic Acid Love leads us through the spectrum of human emotion, the eleven tracks taking us through unconditional devotion (Manic), the deep vulnerability and pain this dedication precipitates (Acid) and the human power to overcome these hurdles and find peace (Love). Jazz knowledge and influences run through the veins of Schmieds Puls, while the tracks remain instantly catchy and full of pop sensibilities.

Unafraid to be confrontational, Mira tells us “part of me wants people to be afraid of me”. It’s a dialogue with the audience that draws you in, while having the capacity to show aggression when the subject calls for it, such as on the track ‘Superior (F*ck You)’.

We caught up with the band for a typically YACK! interview

Hey! What’s keeping you busy at the moment?

I’m at the studio with another band (5K HD) on and off (when I’m not touring). It’s an intense process, ’cause we are also writing at the same time. The second half of september will be a bit calmer though. It’s been a crazy year! A lot of roads, a lot of stages, a lot of new people & a lot of planning and working in a new, improved team. Now I am looking forward to some lazy late summer days in Vienna.

What does being from Austria bring to a band like Schmieds Puls?

I guess I have listened to a lot of chamber and classical music because it is something that crosses your musical path one way or the other when you live in a city like Vienna, that has so much musical history. While I am absolutely not a fan of Mozart, I am completely in love with Schubert and Mahler ….

And for those of us that ignorantly only speak english, what does Schmieds Puls mean?

That’s easy: My last name is Kovacs, which is hungarian (part of my family comes from the border region between Austria and Hungary). It means ‘(black) smith’, wich in german = Schmied. When my sister and I found out about that we started using ‘Schmied’ as a game name. We hosted tonight shows called “Die Schmieds, Frau Schmieds” and such. Later when I was looking for a pseudonym I immediately thought of “Schmieds Puls”, because I mainly write about what fastens and what lowers my pulse and the black smith is me.

Are there any bands or artists that aren’t as well known that have had an impact on your music?

Well-known is a relative thing, no? Do you know Paula Cole? Ani Di Franco ? I just revisited a beautiful old mill on the country side close to where I was born. They arrange a lot of musical events there and I remembered that one of the first concerts I’ve ever been to was one with Sean Kean, an irish folk singer. I loved him so much when I was a kid, that dark and incredibly low voice was so intense. I loved the old scottish and irish tunes they played. Is he known? Over here, he probably was more like an insider tip for folk lovers, haha…

Obviously, my mum. Cause she was the first feminist I knew. My sister and my oldest sister-like friend. They are like a compass to me. I value their oppinions and perspectives! – Do you think anyone actually like The Beatles? HAHA. Yes of course! But you are probably as fed up with the Beatles as I am with questions about Mozart ? Too much is too much, I get it.

Schmieds Puls is going on tour in Germany, Austria and there is also one show at Sebright Arms, London! I will also be in the studio a lot, to complete an album with the band I mentioned earlier. I’m part of the jury of the ‘Viennale’, which is Austria’s biggest film festival /competition. And then I wanted to go to Berlin for a month or so, to write. But everybody is telling my I shouldn’t go in the winter, ‘cause that’s the suicide season….hm.

Do you really want to make me chose?

I love Walter, the bass player, for who he is: the silent double bass player boy, who always looks after the band’s diet. With him we will never starve. Seriously, that guy can eat!

Grobi (drums) is my partner in crime, my executive producer. We are a little too similiar to one another, that’s why our debates about verses, pre choruses and bridges always get emotional. Without him we wouldn’t sound the way we sound. He has the biggest heart!

Borders. Get rid of them! It sounds simple and I know that it is not. But I never understood them. It took me at least until yesterday to get a grasp of the concept, but it’s still bullshit.

I give it all to him, but I am broke after all the drinks, so it’s not so bad.

I don’t know Carol, but after googling her I think I could take her out. I am lifting weights since February.

Lastly, who has been the most and least sexy celebrity of 2018 so far?

Least sexiest: Kanye West (to me, nothing will ever repaired what he has destroyed)