Whilst most might take a stroll through a park or a wood, maybe a glen or a bridleway, I am far more refined and do my strolling through dilapidated urban squalor and pop up art hot spots. It was on one of my more recent strolls that I encountered a fresh and engaging interactive art piece. This particular piece is the work of ‘Jen In A Jar’, a London artist based in the Manor House warehouse community. She cannot claim the credit all for herself however as this was a collaborative creation, commissioned by Haringey Arts (HA) and worked on by two other artists, Blair Zaye and Aiste G (Gurevicute). 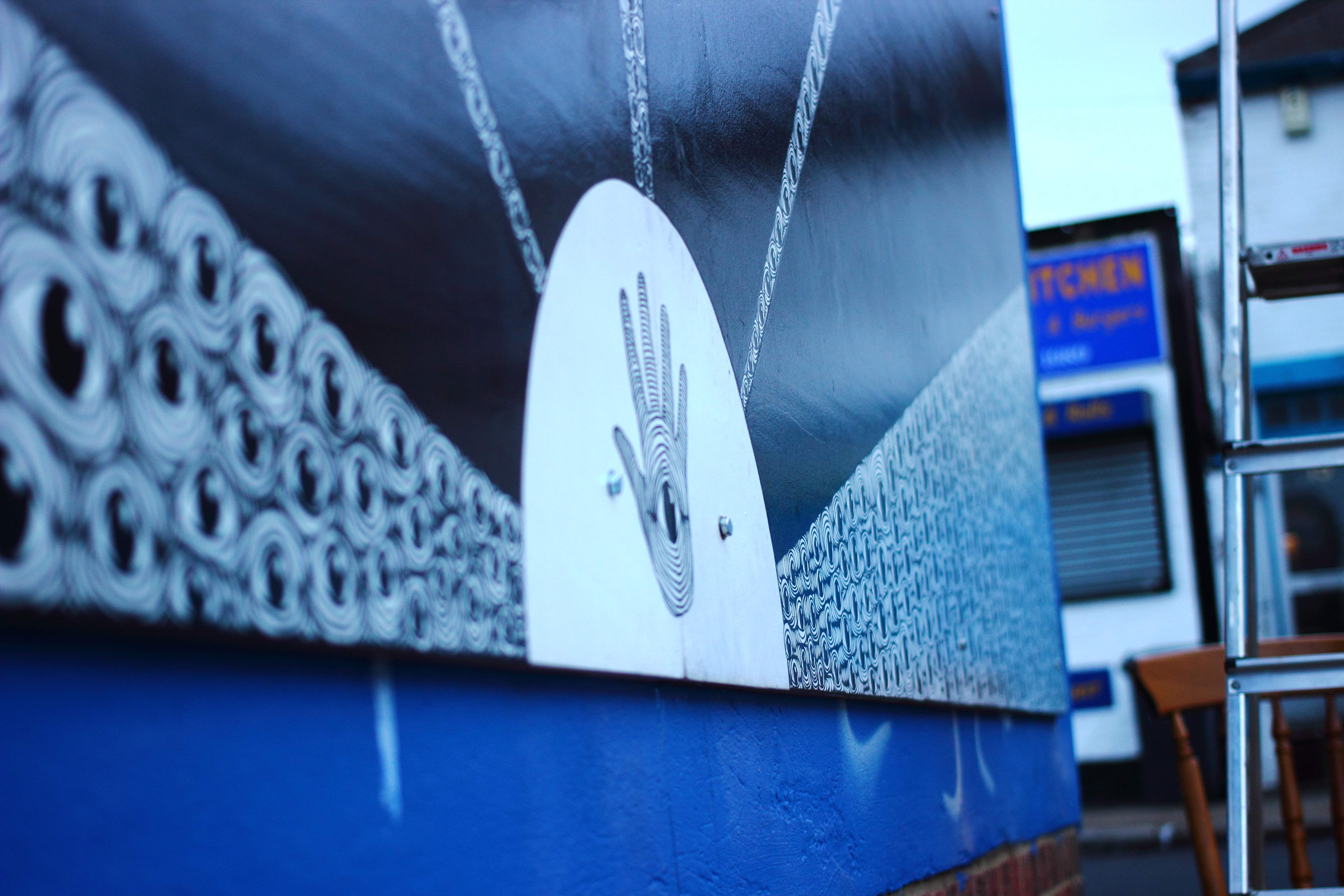 This is not the first time I have been unexpectedly attacked by Jenna’s work, about a year ago I was invited to see a display of hers during a Manor House art event another collaborative effort with fellow Monkey Jar Studio artist, Richard McGrath. When I arrived I was shocked to discover instead of the sophisticated and standard gallery experience accompanied by wine, cheese and snobbery, I was instead under assault by a migrant herd of giant jellyfish. Once the initial panic subsided and I realized not only that this was in fact the art show, but that real jellyfish cannot swim through air, and are therefore in fact not very threatening on land at all. Jenna’s creations however were out of place, surreal, shocking and most of all impressive, a commentary on the encroaching pollution of the ocean displacing it’s inhabitants perhaps? All I know for sure is that jellyfish are fairly majestic in their terrifying repugnance.

Jenna’s latest work is a heat reactive mural, dealing with the issue of gentrification. When heat is applied to the mural it unshackles the piece and unlocks the true beauty that lies within. Whilst the superficial may take a fleeting glance and appreciate the work on it’s striking and cool appearance. Only those willing to get involved hands on (pun intended) will truly understand the piece and the meaning behind it. The audience is encouraged to touch the mural in order to bring it to life, something that is very rewarding and interactive. The clues as to the pieces true nature are there for even the casual passerby to interpret finely illustrated by Blair Zayes informative “Quantra Eye Hand”.  Once touched, the heat causes the black on the mural to give way to the intricate story layered underneath, to read the entire epic the audience must lay their hands on the entire wall and caress the story free. This process makes the art feel more like an extension of the self and something you are involved in, rather than a stagnant and secluded vision. The user is capable of connecting with the piece in a whole new way and the message is not only glaringly obvious but organically embraced as the story is revealed slowly under the warmth of the audiences touch. In an age where everything comes with a touch screen, how can a static image ever hope to compete? Art has to evolve with it’s audience and this is a great example of that, it’s novelty and interactivity lending it a memorability and viral like share value. Couple that with it’s heartfelt and important theme and you have something that is truly enthralling, something that makes you think but also something that in itself is impressive and engaging. The mural is a prophecy detailing two of the possible futures facing the warehouse community in Manor House that it calls home. On one side a tale plays out with the community of creatives that have converted this previously unused industrial space into their home and playground, if allowed to stay and play out their vision the area flourishes becoming a mecca of free thought, creativity and happiness.  On the other side is depicted a shadowy and forlorn desolate place, this being the reality if the creatives are evicted by the council in favor of gentrification, corporate interest and private business. The mural itself is a collaborative effort made possible by the very community that it is trying to defend, commissioned and championed by the Haringey Arts. It serves as a protest banner, a flag flying high on the warehouse ramparts, resisting the constant push from outsiders trying to take away these artists home.

You can find the mural itself and have a little play at 1 Overbury Road, Harringay Warehouse District, N15 6RH.

Links to all of the artists mentioned in todays article can be found below: