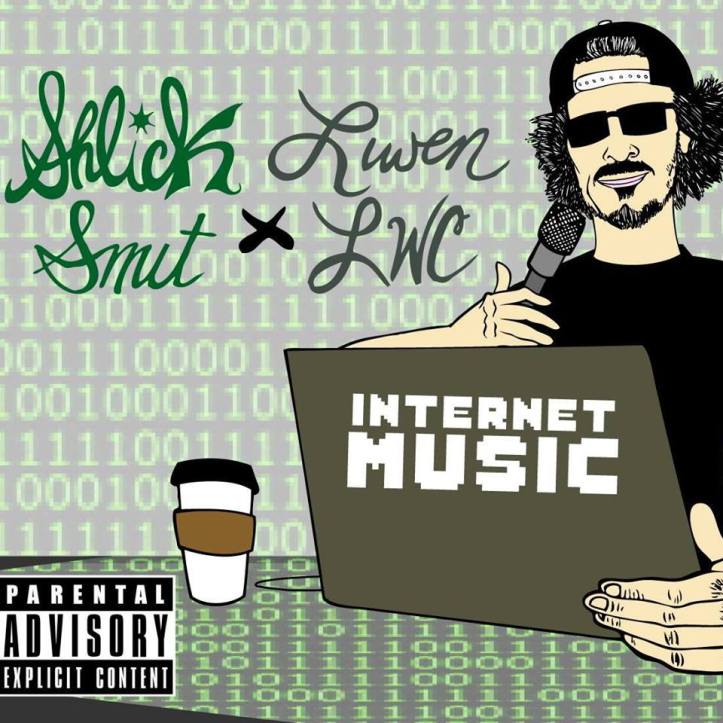 From the moment you click play on Shlick Smit’s free online album you can tell you’re in for a ride. Whilst it fits the mold of a mixtape, due to it being self funded, underground and free to the masses, what has been delivered here is a cohesive and instantly respectable piece of music. What Shlick Smit has produced is something that has a narrative and a message, the songs blend together with incredible fluidity and the album tells a story. So hit the button below and dive into the rabbit hole of Internet Music with us.

It begins with an authoritative collection of sound bites which lay the scene for the battleground we’re about to traverse. From the beginning it’s clear to see even Shlick Smit doesn’t know who is going to be the victor in this melee, the Internet is both the hero and the villain in this piece. When the chatter dims down in comes the first indication of what is on offer within, a jangling, spine tingling break beat hits and the head nodding begins. Shlick Smit doesn’t strut onto this album hogging attention, instead letting the first couple of verses of The Path fall to fellow collaborators Lars Viola and Benny Els. This is a thread that ties the entire project together, that of collaboration, this is an album made possible by the connectivity of the world wide web.  That community and passion is one of Internet Music’s most endearing features, you almost feel a part of it just listening along.

The title track comes in second and rightfully so it’s one of the most memorable on the album, Benny Els returns for his second innings on this album, but he rides this track so much more confidently. Benny and Shlick both spit viciously attacking the egos, shallowness and pitfalls of the digital age but it’s LiwenLWC‘s beat and production that really allow them to spread their wings on this track, this is never more apparent than at the very end of Benny’s verse “once it’s on the net it cannot be undone, like how politicians end up in moral conundrums“. Liwen drops the beat out as punctuation here, it seems simple but it’s swish as fuck. Shlick Smit himself should be commended not only for bringing these ingredients together so well but primarily for providing such a catchy little hook that serves as the bow the gift is finished with.

#TrollLife features Dalton O’Brien and Aleyes B (whose own project The Mentable is a review we’ve been sat on for too long now) and is possibly the most high energy and aggressive track on the album. “You’re an envious prick” calls Shlick as he swaggers into another tight set of bars. Dalton is next up with his very distinct delivery and tears his bars apart through gritted teeth. Aleyes finishes it off with a breezy set of bars, sprinkling them gently over the tail end of the track.

The Articulate Advocates are just fun to listen to. Their laidback low energy delivery belies the amount of work that clearly goes into crafting their intricate rhyme schemes. Zooted Connectors is a skatty little ditty that seemingly veers in and out of control whilst maintaining it’s shuddering momentum throughout.

If the play count on the next track is anything to go by it should be one of the best on the album. Whilst The Palmer Squares draw and a strong returning guest spot from Benny Els obviously deliver the bars, when reviewing the album as a whole the track jars a little bit. The Palmer Squares are prone to becoming a little distracted with wordplay, sometimes to the detriment of any real narrative, but this is also reflected in Benny and Shlick’s bars. Whilst the track itself lacks any real direction it makes up for it in sheer enjoyability, if you’re a word nerd, a bit of a poet or just a fan of bars then this track is going to scratch that itch. TPS’s bars are seemingly completely separate entities but still pack a powerful punch with lines like “There’s two types of people, door mats and matadores“. Benny and Shlick rap together a little more cohesively but still provide bars “Punk! Do you? We run through you with kung fu moves“, “Nothing to prove, and less to give a shit about, writing lines that are priceless and forced to give ’em out“. It’s a bouncy track and the hook is one that again wiggles its way into your brain. If nothing else this is an excellent example of the cypher community that TPS, Benny Els and Shlick Smit are all major players.

We’ve done a previous Featured Artist on In Sanity and Eireny and Catharsis do something special on their track, for me it’s one of the strongest on the project. The message is a dark but fierce one and In Sanity’s psychotic and frenzied delivery sells it. Whilst Catharsis comes in angry and fiery, Eireny spits his verse with a jittery schizophrenic flow. This Canadian/American collab allows all participants to display their humour, wit, intellect and technical ability.

Virtual Reality produced by Phil Gonzo is a collection of sound bites over super chill beats, it works as a short pit stop and feeds into the narrative of the project giving you something to think about. Strange Days is up next the Shlick Smit/Benny Els combo get fresh to death on this track. Never wearing his influences more obviously on his sleeve the hook on this track is old school and contemporary in equal measure. The verses themselves surf the jazzy instrumental expertly and the track puts an exclamation mark on the album.

Just as distracting as it’s inspiration Internet Music gives you something new with every track, so it’s easy to lose sight of the solid work Shlick Smit himself has put into this project. As you are bombarded with talent and bars from the roster of underground talent the slick stylings of Smit himself can get lost in the entirety of it all. It should be remarked upon that he makes a resounding and memorable impact on every track. His lack of ego and easy, established flow go down smooth every time.

The narrative of the album as a whole is something that needs to be chewed over a few times to be properly digested, I would have liked to go into this with a great deal more depth but the word count is already running high and the first and most important task was making sure every contributing artist at least got a mention.

As always music is completely subjective so leave your comment and favorite tracks in the comments section.

Feel free to drop this worthy project some dollar, or download the album for free here: https://shlicksmit.bandcamp.com/album/internet-music