First impressions of the Buffalo Bar did not give me the Celtic Viking vibes that Firewoodisland are known for. Next to Highbury and Islington tube, entering through an ominous door, down the stairs into the basement, the blood red walls aggressively baring down on you. There wasn’t much too soothing about these surroundings.

Perhaps more fitting to the atmosphere was the first band on stage, Deadwall. Judging from their name I wasn’t expecting such an unassuming stage presence. Looking even more laid back than your average indie band, with all the nonchalance of a sleeping cat, I was fairly knocked back to hear their heavy waves of indie-rock pouring towards me.

Their psychedelic vibes were juxtaposed by the front man’s soft, high tones, which on occasion was inaudible. Deadwall’s most enjoyable tracks were their least intense, some nice key changes kept them interesting and got the crowed nicely toasted for the introduction of the next act.

Up stepped Firewoodisland, causally emerging from the crowd and on to the stage, as if part of the rabble themselves. This is typical of the bands ethos, the communal, hippy vibe they radiate is warm and infectious. No more so than when ascending to the stage, the kindly crowd making you feel like part of the collective. 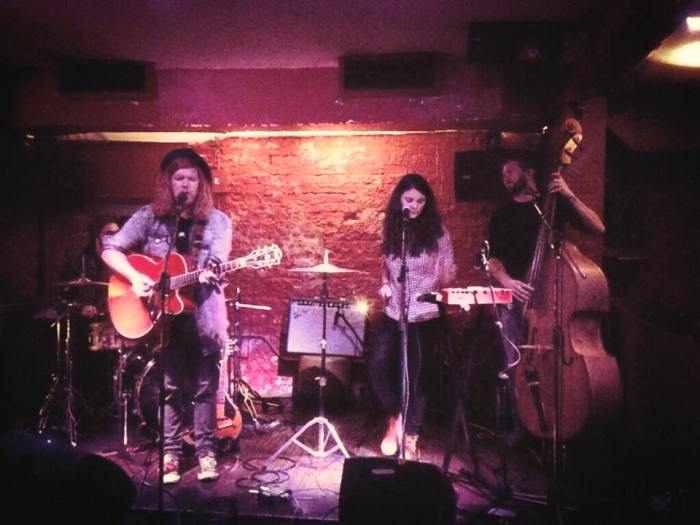 The front-man Stain Vedoy, didn’t waste any time in getting started. His long blonde, bushy hair giving him that Nordic essence, like a Viking crossed indie-type, all he was missing was two horns poking out of his trilby hat. The rest of the band had that same laid back napping cat feel, so Stain certainly accounted for a large portion of their stage presence.

Their opening song, ‘Just Human After All’ did nothing to dispel my first judgments. It gave you a united feeling, the type of sensation you expect from Edward Sharpe and the Magnetic Zeros, with a folkyness thrown in for good measure. The rhythmic beat got you going and the powerful message gave you an uplifting emotion.

All of a sudden the imposing venue had a different feeling. What could have been considered aggressive, was now ambient and atmospheric. The tone had changed purely from the power of Firewoodisland’s Celtic Viking sounds.

The next song to be performed was ‘Dancing In A Tea Cup’, and it did much to live up to its title. A cutesy tune with much of the same background sound to their opener, the double bass creating a bouncing rhythm impossible not to jig to.

A feature of most Firewoodisland songs is the harmonies that Stain and his female counterpart produce. Whilst uplifting it appeared in every single song during their live performance, often feeling like the seemingly endless ‘la la las’ would never cease.
It seems a shame to criticise them for this, but even by the third or fourth song you felt you knew where the song was going. Beginning with a folky twang and ending on a euphoric harmony.

By the time they climaxed with their recent release ‘Simon’, you kinda felt like you’d heard it already. The crowd was at its most embracing but that probably had something to do with it being the end of the set, which despite their energy throughout, finished on a bit of a whimper.

On stage next was the youthful Theo Altieri, who was there to launch his new EP Get Along. Full of confidence, the young lad from Swindon injected some much needed life into Buffalo bar.

With fun energetic riffs, Theo certainly took the place up a few gears. With a sort of laddish charm, the indie performer had the energy of the Strokes with a voice not too far away from Alex Turners.

At one point Theo played one of his slower songs, ‘Sister’. It came around the middle of his set and was a welcome addition, as it showed a more mature side to his cheekiness. He will probably have to gain a greater understanding of this going forward as you get the feeling, although clearly an able artist, he has yet to develop fully.

It was certainly an eclectic set list at the Buffalo Bar and an all round decent gig. Firewoodisland, if slightly underwhelming, gave a solid and spirited performance. It would be interesting to see them on a festival stage, they are the kind of band that feed off their audience, here it could be argued, there wasn’t much more than scraps.