William Wallace made his first foray into the world of horror with ‘Welcome To Cannibal County’ but it was an understandably quiet welcome, he was a no name and it was a low budget independent film. Since then he has been fine tuning his craft until finally he is ready to re-visit his first work with his now expanded repertoire of gore and cinematic skill. ‘Acid Eater’ is a re-imagining of his first work, expanding and exploring it further, burrowing into the very soul of the piece or something like that… we’re just hoping it’s twice as bloody!

William Wallace is no longer a no name, now he is a… some name, having completed his degree and releasing two short films off his own steam before jet setting over to America to crew for and shoot the behind the scenes documentary for ‘Science Team‘. ‘Acid Eater’ is his current project, something he is clearly pouring himself into, you can view the indiegogo campaign video below, and we seriously recommend you help fund this fantastic little fear fest.

Whilst ‘Welcome To Cannibal County’ is by no means a bad short film, it’s a cheeky blood specked slice, however even Mr Wallace himself recognizes how he has progressed since that project was completed. WtCC serves up all the necerssary ingredients, it just feels a little clumsy sometimes, what we are hoping to see from Acid Eater is that same vision, just executed with a little more experience, something the team and filmmaker himself now have a lot more of. WtCC has it’s moments of brilliance, the found footage at the beginning is expertly achieved and believable, the film throughout benefits from stylish cinematography and the acting whilst wooden in places is enjoyable and mostly believable. The gore in the film is scream worthy, the razored eye being our favorite nugget of squeam inducing ridiculousness.

With ‘Field Poppy’ Wallace stretches his quite obviously enhanced (possibly cybernetically) film making legs. The piece is much more streamline and polished. The acting and the script have received the same ‘leveling up’ and the whole thing is an obvious evolution. If the trend follows ‘Acid Eater’ should be an extremely exciting prospect indeed. Stand out ‘Field Poppy’ moment for us however has to be the Action Man memory enactment. You can find a link to the film on the Indiegogo and check it out yourselves for gods sake, we’re not going to spoon feed you all the links. 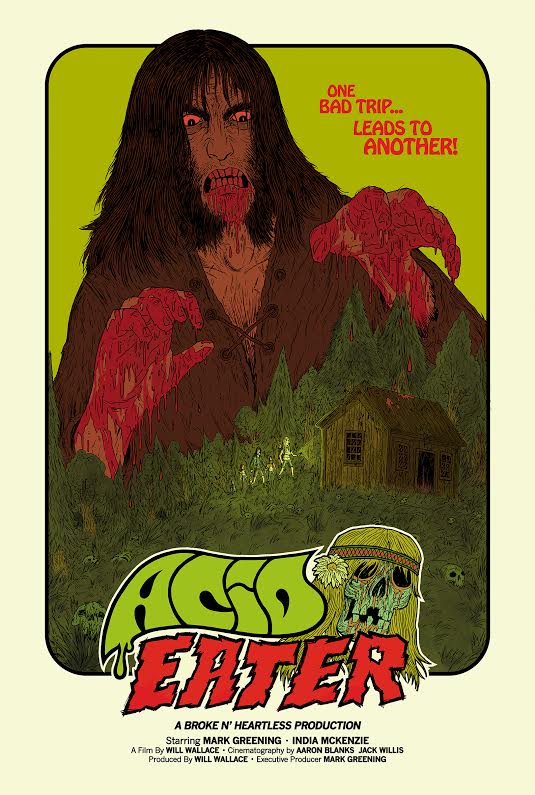 Mark Greening (Electric Wizard) will be returning as the tripped out, cannibal killer, as well as contributing to the soundtrack for this second outing. India McKenzie who was in the first film as well as portraying the concerned nurse in ‘Field Poppy’ will also be reprising a role. The synopsis is a simple one: kids are taking drugs and dying in the local woods famous for once being home to a hippie commune, a group of teenagers head there to trip but inadvertently uncover the truth, resulting in them meeting awesomely horrible, very bloody ends.