These are the remaining journal entries of an Ace Freely – Freelance Journalist, who was in attendance at the annual Boomtown Fair 2014, the other pages are either ripped out, water soaked or too obscured by cigarette burns and other miscellaneous muck. We present them to you in the hopes that they will enlighten you in regards to the encompassing madness ensued at the fair.

As the blinkers of order and reality slowly lift, my mind accepts the chaos of my new surroundings. I shudder to think of the mundane existence I had once previously accepted. Fresh through the gates I rest my wordly possessions on the grass verge next to me as I take a moment taking stock. I’ve been told that this “Boomtown” is an affluent and exciting place, somewhere a man can find himself and make his fortune doing so. I’ve packed light, leaving my life behind me and focusing on the future. All I’ve brought with me is a humble tent and enough provisions to last me until the first paycheck.

The streets here are flooded with the sweat of a hard days work, washed clean only by the merriment and alcohol that rivers through those same streets when the working day is done. I arrived late and decided I’d leave off looking for work till tomorrow, instead spending what little funds I have with me on joining the locals in dystopian revelry. I take just enough time to pitch my tent before setting off for the heart of the town in search of whiskey, women and song.

The most arduous stress was behind me I figured, the journey had been long and tough but I’d got here in one piece. Before me now was a sprawling town of madness and opportunity, I set up shop in a small gathering of tents nestled precariously into the side of the main hill on which Boomtown was founded. Before me is a choice, I can head uphill into the pomp and circumstance of the towns elite, or down into the slime, muck, chaos and filth of the more working class bars and entertainment. Given that I am new in town and frankly broke I choose the latter.

I end up in a little place known as The Devil Kicks Dancehall, outside the venue is a sea of scrapped cars and inside is hardly any cleaner. It’s a grotty but welcoming place, it smells of the sweat of its patrons but mostly because everybody there is having such a good goddamn time. Decked out like an old 50’s diner come circus tent, its retro feel reaches out to the old soul in me whilst the jangling guitar strummed from the stage speaks to the young one. I take a pull from the whisky in my hip flask and proceed to make friends and enjoy the music, something that wasn’t very hard to do at all I can tell you. 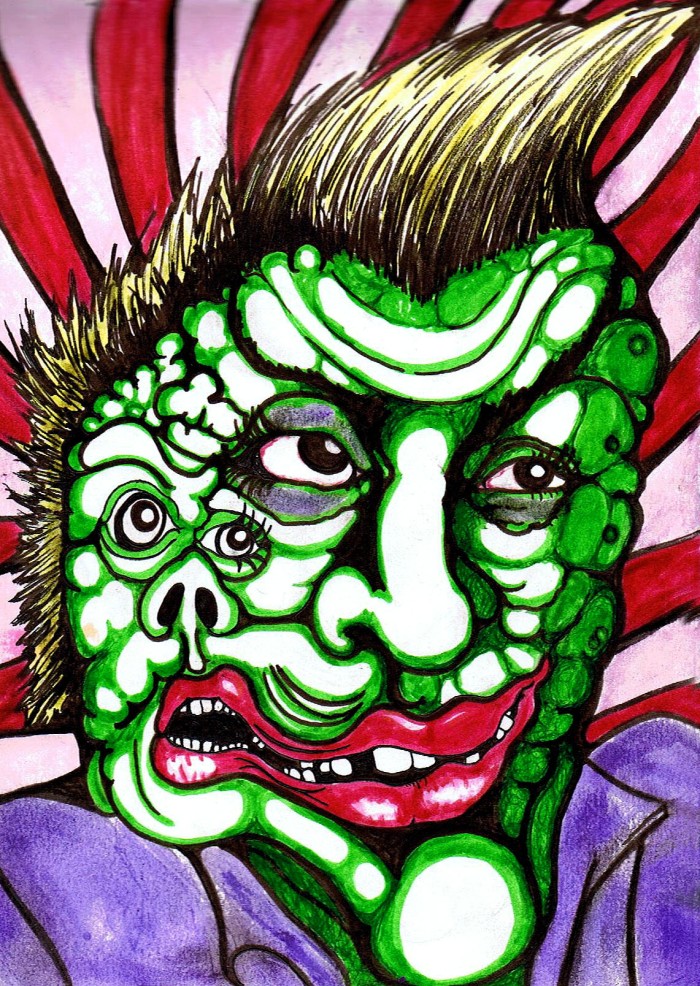 The headline band playing this evening go by the name Demented Are Go! and they deliver a set that creeps up the very spine of me, forcing me to nod my head and shuffle my feet in appreciation. It’s a disturbing and ghoulish sound punctuated by a bass so ritually rhythmic it’s almost hypnotic. After I’ve had my fill I stumble back into the streets of Boomtown and straight into the arms of a spirited group heading for the Lucky Cat, a late night haunt of those in the know apparently. We burst in the door laughing and giggling only to be silenced by the sight before us, tonight’s musical entertainment The Jack Ratts who smashed through a set that was dizzyingly entertaining, a mead swilling punk folk band that had you lifting your own glass in appreciation as often as you spilt it from overenthusiastic dancing. After the band were done we smoked a deck of cigarettes and made plans for tomorrow, I stumbled back to my tent satisfied and excited.

As morning broke so did my bowels, I burst out of my tent onto the dew specked grass and scanned the horizon for a convenience of some sort. I spotted a row of them and my heart skipped, I ran towards them clutching my bottom in a vain attempt to calm the ever rising, bubbling explosion. When I finally arrived I flung open the door only to be greeted by one of the most arresting sights of my entire life, it was almost beautiful in it’s perfect disgustitude. 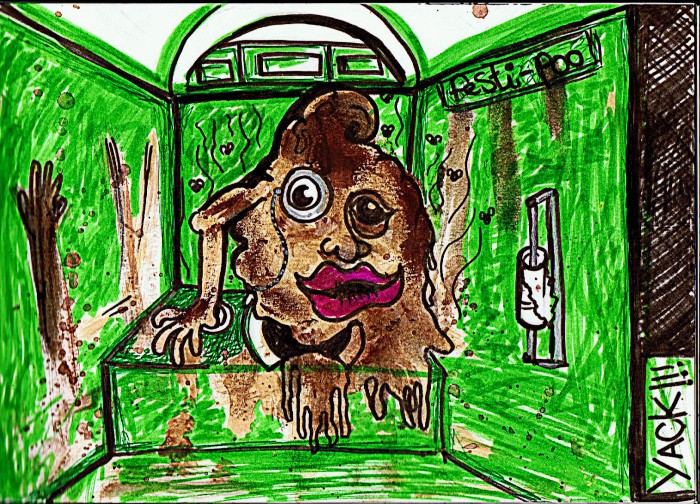 Rising from the commode was a fetid foam of feces, a pyramid of poo. I stood there marveling it for a moment before my own contribution to the work of art made another push for the exit. I turned my back and placed my hands either side of the humongous heap and levitated my now bare arse above it. As I exited the cubicle, I felt I had achieved something, contributed in some way. Like somehow all of us who had visited that cubicle had come together and created something amazing… or maybe I just had really needed a shit.

I spent the second day mostly scouring the site for employment. I went from shop to shop, building to building trying to score some work but kept getting distracted and set erroneous tasks by the wacky folk that inhabit this peculiar place. They all seemed to stare at me, smiling, their jaws constantly rotating, encouraging me to join them in their madness. When I’d finally had enough I headed to the town hall, sure I would find some answers of some sort there, but I had no such luck, Mayor Jose Burrita had apparently allowed the whole town to sink into a state of stark lunacy. I was dragged into a dark room by a sinister pair who seemed to take offence to the questions I had been asking, they sat me in a chair and shone a lamp in my face, I nervously giggled. They asked me a lot of questions, but they seemed to have had me pegged for a crime I had not committed. I feigned ignorance for a while but t was of no use, so I changed tactics and cracked, confessing to a completely separate but trivial crime. This seemed to both confuse and appease them and I was allowed to leave, and leave I did with no intention of heading back to that farcical town hall in a hurry.

In dire need of a tall beer and unfortunately now finding myself uptown of the hill divide I headed for the Wild West, a district I figured I could lay low in, maybe surround myself with a couple similarly disenfranchised individuals. I made my way into the first bar I lay my owns upon and ordered a cold beer, I took it to my table and in what seemed like no time at all I had amassed a table full of empty glasses and a new group of companions. They were a quick talking, jittery bunch but they used big words and articulate prose so I liked them well enough. They were excited about a secret little gig in the woods somewhere known as the The Wandering Word so we downed our beers and headed out.

The Wandering Word was a beautiful little spot, set among the trees and equidistant from both uptown and downtown, an eerie and awe inspiring silence grips the place most of the time, however when we arrived Adam Kammerling & The Head Collectors were in full effect and silence had been banished. Blending the art of linguistics, with the beauty of freed music they jammed in a way few others can and the crowd who were feeling it gave it back to them enthusiastically. It was an intimate affair but one well remembered.

After an already long day I was feeling drained, hungover, tired and spoiled for choice, I had no idea where to head next or what to do, I dragged my weary feet back up town and on the corner of the town center bumped into a sweet odd lady peddling various homemade lemonades. I smacked my mouth together to test how dry it was, it was Sahara desert. I jerked my freakishly broken body over to her stall and ordered a lemonade. She smiled at me as I paid her, in a knowing and almost mystic way. I took a sip in front of her so I could either demand a refund or tip her with my obvious enjoyment. It turned out to be the latter, such sweet liquid wonderment I have never previously known. As it slipped across my tongue, dancing on every tastebud I have in transit it throttled down my throat awakening my every sense on it’s way. I downed the entire glass and immediately ordered a second, I left that stall giddy and awake, ready for a night of nuisance and revelry. 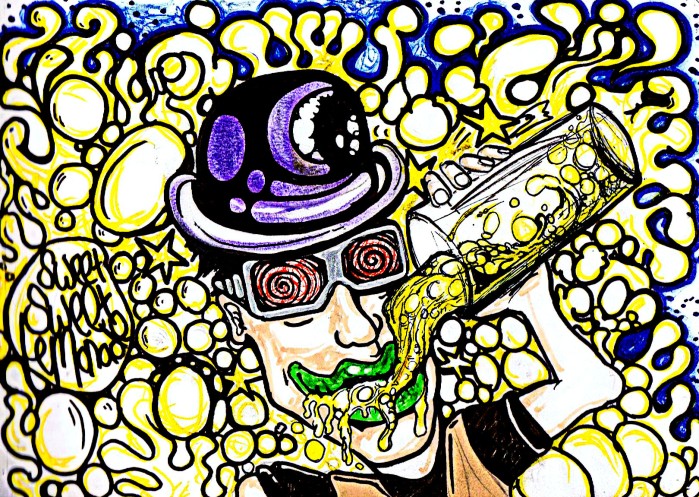 Sunday morning, I awake wet, miserable and disgustingly sober. I rocket out of my tent and immediately set about remedying this foul situation. Today is to be my last day at Boomtown Fair and I’ll be damned if I’m going to spend it in sobriety. I have failed to find work, I haven’t seen half as many bands as I would have liked to and to top it all off I’ve been rained on and hassled by juvenile delinquents almost constantly. The fair is a beautiful place, it’s community and spirit a thing far removed from reality, but it is slowly being infiltrated by a darkness. The darkness creeps in with increased numbers and it throws it’s shadow over the entire site. Under the cover of night, blinded by the bright lights and hustle you could be enchanted into believing this is a mecca, an unsurpassable juggernaut of wistful abandon, childlike wonder and XXX rated debauchery. However in the light of day you can peek behind those beautifully built fake walls and see the wizened and wrinkly old man behind them, the reality is expansion, just like everywhere else. You can put your shades on and ignore it though and have a fucking good time whilst you’re at it.

One thought on “Boomtown Diaries: Chapter 6”