Whilst some believe that true art should be restricted and vaulted away in galleries, I, an obviously more refined individual, do not. What we need is a revolution in the way art is conceptualized. Art is coming for the people, art is raining down all around us, art is constantly coming, and we are being showered in the warm, gooey, loving embrace of art, even as I type this. The internet is a freeing and wonderful resource opening up whole new realms of possibility and opportunity, many an intrepid artist has already taken to this medium to share their work. I have sifted through the best and the worst of those, offering to you a selection of the more interesting pieces.

As you mindlessly refresh your various social media “news” feeds in your aimless quest for some sort of fulfillment, you have no doubt noticed that around one in every three videos or picture posts star an animal of some kind. There are several reasons why this could be, as the world every day strives to distance the human species from it’s connection to nature, we find ourselves drawn to that same connection, hailing our furry friends in a form of deification, reminded in some way that we are all connected. It could also be true that as more and more people find themselves working too many hours, or in housing situations that don’t allow them to have pets, they could be living vicariously through these internet animals. Whatever the reasoning, it is certainly true that we can learn a lot from thinking about why each of these animals have become so popular.

Tuna with his aesthetically unusual features, has become somewhat of an internet sensation, his website tunameltsmyheart.com has a dizzying amount of followers. He is one of many pets who have become “internet famous” due to a specific look that makes them instantly endearing, Tuna however is the Yack personal favourite as this typically unattractive dog has proven that the standardized image of beauty is not one that is as universally accepted as we are often lead to believe. With pictures uploaded daily, subscribing to Tuna is sort of like having your own pet, only without physical interaction, obligation to feed and walk and any other from of responsibility, which is in shocking symmetry with the nature of social media and modern human interaction as a whole. 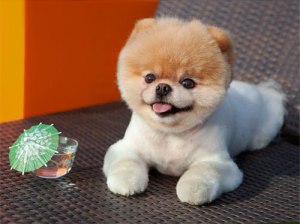 What kind of pampered pup drinks his water with a cocktail umbrella in it? The answer is a heinously pretentious one.

If there is an antithesis to Tuna the dog, Boo is it. Whilst Tuna can be considered a radical statement against the shallow culture we are all a part of, Boo embraces and embodies those same crippling and disturbing virtues. The ultimate manifestation of preening vanity, Boo has been bred to be perfect. This is an animal that defies nature becoming something else entirely, a pruned and modified creature that exists on the internet and in reality as an abomination, the only statement that can be ascertained from this pups rise to stardom through sharing is that if you are pretty as a picture, no one will get bored with pictures of you, even if they are shared daily.

Latching on to the viral capabilities that come with cutesy videos featuring members of the fluffier portion of the animal kingdom. Web savvy companies can create adverts like this one that are nothing short of exploitation, and we will mindlessly consume and circulate these videos/pictures for them. Some hide behind subtle product placement or location, but Liberty Mountain Resort in an open form of mockery blazon their company’s name across the title and credits of this video clip. In which we see an Opossum wearing a jumper and season pass, seemingly snowboarding. The Opossum reportedly named Ratatouille, is actually a very poor snowboarder, on account largely to him being an Opossum. He is quite clearly just being placed upon the board and pushed along, which is hardly very skillful, I could find a rock with the same skillset, yet that has not stopped this video from fascinating and delighting people the world over, in what can be considered an analogy of the banal way we now willingly and mindlessly consume advertisement.

Cats out of all animals undeniably rule the internet, with that said, this is their sad faced king. Why out of all animals it is the feline that has become so championed on the internet is an interesting point that warrants exploration. Cats unlike dogs typically are a far more independent animal, this regal and mysterious quality means that they are of far more interest to us as a species. On the internet they perhaps embody the loneliness and isolation felt by the average surfer, like the cats they are viewing they believe themselves to be above the need for human interaction and affection.