Mediocre At Best is the debut solo EP by singer song writer Kristian Lasham. A title which Lasham explains is a statement about today’s music and how ‘music doesn’t have to be perfect and polished or over produced’, which from the introduction alone you can clearly hear that this is reflected in his own work.  There is no fancy flourish or shiny veneer to this EP and that concept gives it a unique down to earth quality. Mediocre At Best is a collection of four tracks and an instrumental intro that sound like they were written and recorded in someone’s garage – and it turns out they kind of were. Lasham recorded the EP himself in his independent home studio, ‘TrueTones’ in Crawley, making this the most solo, a solo EP can get. 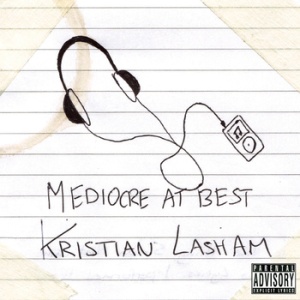 The introduction opens the EP you a perfect soundscape with clunky timing and heavy guitar riffs.  In fact it sounds dangerously tight, something Lasham obviously try’s to fix by coming in on vocals on track two ‘Waiting‘ deliberately off key. A thumping and thunderous riff is weakened endearingly by Lasham’s wilting vocals, the lyrics are permeated with metaphors of blindness and finding what you have lost from your past which is again recalling the retro punk tone of the EP. Track three ‘Living In A Mystery’ is a much funkier little number, honestly it fits together a little more smoothly, wriggling into your ear and buzzing down to your feet getting those toes tapping. ‘Waiting’, the fourth track, has a more melodic and melancholic tenor to it that stands out, simple but powerful. It however is left to the final track ‘Childish Games’ to really slam home just how versatile and enjoyable this EP is, a dirty, easy, fun little guitar track with plenty of bite.

As a debut this one certainly makes a statement and has a defined sound to it, ‘Mediocre At Best’ has an indie heart and a punk haircut. It will be interesting to see where Lasham goes next with this raw and unfiltered concept, DIY music is definitely coming into the forefront and this is a brilliant example why. So whilst Kristian tries to spit on the awkwardly polished EP he just put out, we’ll try to ignore all the posturing and just enjoy it for what it is, some dude making pretty good music from his garage.

Mediocre At Best can be purchased in physical form for £5 or as a download for £3 at kristianlashammusic.bandcamp.com