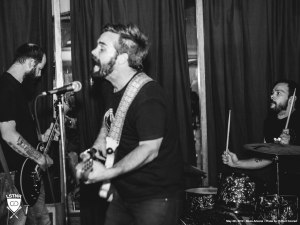 On the 21st of April 2014 Listener played The Joiners in Southampton, Yack was privileged enough to be amongst the crowd for that humbling experience. The Joiners is a venue steeped in musical legacy and heritage, it is one of those venues that physically seems unimportant or dilapidated, but there is an energy and community that seep from every warped floorboard. The staff are friendly and clearly know their jobs well, performing their duties with a passion, the sound and lighting was appropriate and perfected, allowing the audience to be stunned by the majesty of the artists who play there.

Listener on record and Listener live are two entirely different experiences. This is not in any way an insult to their studio sound, on record they are equally arresting, Dan Smith’s captivating lyrics entrancing you and transporting you into a journey of introspection and discovery. The music that backs these lyrics is homely and simple, familiar and comfortable. There are moments on the album where the music takes center stage, but the leading player is definitely the lyricism. This is -not- the case when you have the distinct pleasure of seeing the band live. Live Listener are an entirely different beast altogether.

Kris Rochelle beats the drums into submission with the fury and intent of a man possessed, Christin Nelson plays his guitar with a passion and energy that bleeds blood into every strum and Dan Smith masterfully provides rhythmic bass and enlightened lyricism, occasionally taking a break only to blast out a guttural trumpet solo.

Dan Smith delivers his vocals and message with the honest and exhausting energy of a drunk man stumbling across a radical self realization, he screams these truths at the top of his lungs and to those ears in his vicinity they find a home. His presence on stage is just as powerful, barefooted he stomps through his musical poetry, with the help of his two soul fuelled bandmates, live their sound is a rapturous one, a frantic energy that is almost surprising when compared with the recorded output. You could not have expected the volume and frenzied passion that they pour into their songs live, a thunderous cacophony of heart-song and musicality. Listener are louder than metal, more passionate than punk, more lyrical than hip hop and more emotional than indie, the reason people struggle to label this band is due to the fact that you can’t, you don’t need to, they are music.

‘Wooden Heart’ was a particularly memorable part of the set, as Dan introduced and performed the first half acapella, truly driving home just how powerful this man’s words can be. Another sombering moment came towards the end of the set when the band blasted out ‘There Are Wrecking Balls Inside Us’ from new album ‘Time Is A Machine’, the words and atmosphere cutting to the very core of quite a few people in the audience.

Throughout Listener’s set Dan repeatedly tried to engage the crowd in banter and in between songs was simultaneously charming, aloof and humorous. Truly though most of the crowd was still struck dumb by the previous amazement to register anything barring the sonorous sound of the next nugget of cerebral nectar cleverly masqueraded as song. After the set was done the band joined the crowd, happily interacting with the fan base and generally just hanging out, sometimes when an act does this it feels forced or obligated. This was not the case, Dan, Christin and Kris seemed just as excited to meet the fans as they were to meet them.

The general mood and feeling after seeing this tremendous band live can be summarised best in the words of a fan overheard in the smoking area, “Listener are the first band I have ever gone to see more than once, this is my third time and I can’t wait to see them again.”