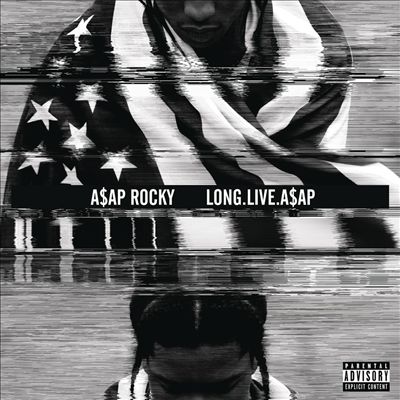 ‘Long Live ASAP’ is an album so riddled with cliché it could make for a truly excellent drinking game, unfortunately as an album this makes it boring, predictable and ultimately pointless.

I approached this album with honest enthusiasm, hoping that in the filler I would find a flow, wit or lyricism that could possibly explain the hype. I was thoroughly disappointed, ASAP Rocky is the very reason that some people still balk at the idea of hip hop serving up anything more stimulating than booze, bitches and bling. There is no narrative or message in this album, it is purely an album produced for the sake of it, not challenging anything, not evolving or improving upon anything, just picking out all the worst tropes of the genre and playing on them, not as satire . . . at least I don’t think so, maybe ASAP Rocky should do a Robin Thicke and claim it was all a parody though. In fact ASAP Rocky, if you are reading this send a signed confession to yackmagazine@gmail.com and we will retract this article, for now though, we will be sticking to our guns in the belief this album was a legitimate effort and it has failed so badly at producing a single song of merit that we are going to pick it apart piece by piece, throw the shit shards into a trash can, douse it in petrol and our own piss and then set it on fire warming our hands on the flames and our minds on the fact that there is one less copy of this awful album in existence.

More ass than assonance, definitely more con than consonance, ASAP Rocky relies almost entirely on weak end rhyme and ‘swag’, a one trick pony who has managed to create a whole album of songs bragging about just how cool and good at rap he is using all the current trends pioneered by far more impressive artists. After slogging through the first stream of songs all sounding exactly the same, LVL stood out as one of the few points on the album where I almost had to rewind due to some impressive bars, this surprising offence was isolated and unfortunately not expanded upon, and the urge to revisit it quickly dissipated.

Fuckin Problems is one of the worst songs of all time. It brings down everyone involved. I have time for Kendrick Lemar, his lyrics flirt with dizzying displays of the poetic and his rhyme schemes are incredibly intrinsic, he is also not afraid to put out tracks that explore a theme or that stimulate an intellectual response. But now thanks to the ‘Grrl aye know yo wan this diiii’ line I am inclined to think the man has had a stroke and cannot pronounce words anymore, maybe that brilliance before was just the final spasm of a man about to fall apart. As for ASAP‘s contribution to this ‘song’ (I use that term in it’s absolute loosest term) it borders on the insane, to think that anyone could honestly rate this. When it comes to the repetitive and needless use of the ‘N’ word in rap, I am firmly in the Dean Atta or Akala camp of thought on the subject, that being said ASAP takes it to a whole new level with the cheap and cheesey ‘ish and ‘rich’ line which is both the dumbest and most offensive thing I have ever heard. I won’t even comment on Drake’s input as the dude is just a Ken doll dressed up as a gangster, his flow and wordplay are so weak, slow and outdated that I honestly think him and Vanilla Ice could make a ‘good’ double act, in the same way that the original Robocop was a ‘good’ movie at least.

The next steaming pile comes in the form of Wild For The Night, which if you imagine the worst Skrillex song you have ever heard (hard to choose I know), slow it down to a geriatric pace and lose the ‘drop’, then sprinkle it with some really average bars spat so feebly that the spittle forms a drooping and awkward globule hanging from the spittee’s lips, that song you’ve imagined in your head is ten times better than track 8 of ‘Long Live ASAP’.

Train comes out of nowhere and is honestly an enjoyable track, probably due to the fact that the long list of featuring artists means ASAP gets minimal influence over it. If the album scores any praise at all this song would be the only contributing factor. It goes back downhill from there however, from Fashion Killa onwards the album is pretty much a parody of itself, boldly going where no album has dared go before, instant redundancy. ASAP Rocky does occasionally surprise with a bar or two that is almost intriguing on tracks such as Suddenly but by the time you get there your mind is so numbed by the constant assault of average that you wouldn’t really even notice if Rakim himself made a guest spot. I will listen to this album only one more time in my entire life, that being tonight as I drown my misery by necking a shot of tequila every time ASAP Rocky spits a boast about how tight his rhymes are before failing to rhyme that boast with the next line, a shot for every swag bomb and two shots everytime he forces a line in just for the sake of his weak ass rhyme schemes that is unrelated to the rest of the track. I think I’ll be blackout by the 3rd song and hopefully that will erase this colossal pile of generic garbage from my memory.